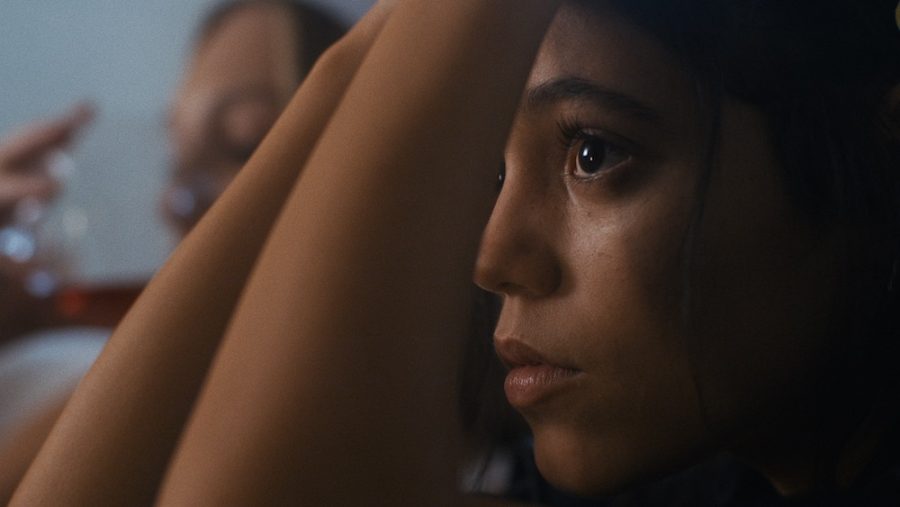 After a shooting at her high school, Vada (Jenna Ortega) deals with the aftermath and the confusing emotions involved with experiencing tragedy. She develops a deep friendship with her classmate Mia (Maddie Ziegler), who she met during the shooting, and eventually Vada begins making decisions that disrupt her normal routine.

This film deals with many heavy topics, such as school shootings, trauma, mental illness and drug use. However, they do so without glorifying it. It felt very realistic and captivating.

The format of this film was a wonderful metaphor for how desensitized our country is to school shootings and other traumatic incidents. The tragedy occurs, everyone is upset for a week until  we’re captivated by a new story, a new romance or big influencer. We tend to forget about the people who have to live with what they experienced, especially the ones who aren’t speaking out.

Then another disaster happens, and the cycle restarts, rise and repeat.

The standout component of “The Fallout” is by far Ortega’s performance. Each emotion she conveyed was breathtaking. Her anxieties had me experiencing them with her. Seeing Ortega grow from an actress who was once on Disney Channel to such a mature and impactful role was delightful.

Alongside Ortega, Ziegler’s acting was also superb. As someone who watched her as a little girl  on “Dance Moms,” I had only seen her as a reality star and didn’t have the chance to see any of her acting chops, but she did not disappoint. While she did not have as many intense scenes as Ortega, her performance was strong and the two actresses had great chemistry on screen.

The writing of this film was another breath of fresh air. I have seen far too many films centered around teen characters  who are clearly written by adults who have no clue how teens really talk to each other. While some of the text messages were a tad cringeworthy, it was great to hear two characters talking to each other without constant internet slang and catchphrases.

Something I found quite interesting— not necessarily about the film itself but its creation— has to do with the writer and director Megan Park. She played a character on “The Secret Life of the American Teenager” from 2008-2013, alongside Shailene Woodley, who played the therapist in the film. The show was well-known for being a comedically unrealistic depiction of teens and how they truly act. The fact that she went on to write such a great representation of teen culture is both ironic and satisfying.

I would recommend “The Fallout” to anyone and everyone. Its impact left me speechless. If you’re looking for a feel-good pick-me-up film, you might venture elsewhere, but I believe it is something that people of all ages should experience.